Inflatables for the 2017 AFL season: 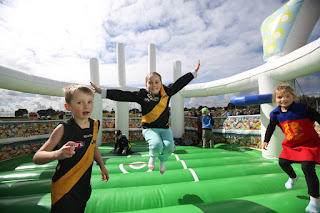 This season, Giant Inflatables created many units for the AFL and affiliated teams. Many of our inflatables are taken across Australia to help increase and diversify the AFL fan-base. 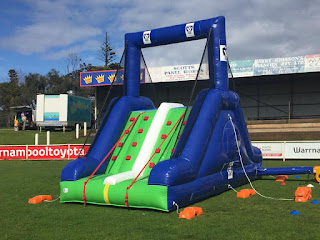 This year's AFL country inflatables included, Inflatable Stadiums, Mini Goals, Handball Targets, Climb And Slide, and many more.
With our units travelling the country, we also supply inflatables for more local uses. 2017 Premiers, Richmond Tigers, received a Giant Inflatable Club Jersey which was proudly displayed at all their game day events. Giant inflatables also contributed to this years Kick Across the Yarra with inflatables buoys and even a Giant KFC bucket into which players would kick the ball. 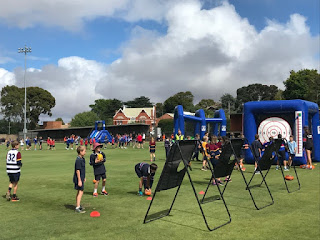 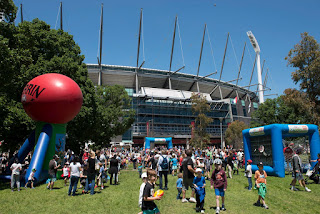 Each and evey unit that leaves Giant Inflatables is made with the highest quality materials and ship with safety assurance that is up to stringent Australian standards. This is why in 2017 the official AFL playground celebrated its 5th year of play. Each week at the MCG fans will find the official AFL playground on the grounds outside the famous stadium, complete with all manner of inflatable products produced by Giant Inflatables, and still going string 5 years down the line. 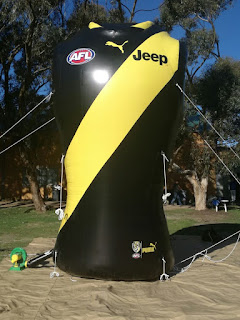 Why Giant Inflatables is Trusted by the AFL:

With 20 years of industry experience, Giant Inflatables prides itself on outstanding service and unparalleled knowledge of the sports marketing industry. We work in conjunction with our clients, who provide us with their ideas, and compliment that with our years of experience. Together every client will receive a unit that is beyond expectations, creating memorable and unique brand activations.

Along with a history working in the sports marketing industry, Giant Inflatables ensures that units are made to Australian Safety standards. As an Australian owned and operated company, we have the resources to cater to any client, no matter the requirements, a feat that our Chinese competitors struggle to achieve. Years of safety ratings and research have resulted in state of the art tether points that are unique to Giant Inflatables.

Out TTT (Tried Tested Trusted) stamp, is trusted by many Large Scale organisations such as Cricket Australia, Tennis Australia, The A League, Caltex, Shell, Red Bull, Toyota, Mcdonalds and many more.

Giant Inflatables is the Number One Marketing and Sports Inflatables supplier for a reason, so contact us today!

"We've had a great response to the Handball Targets - our team enjoy using them at our activations...."
- Katie de Haer
"The inflatable looked amazing - exactly like our original sketch! Our client and the basketball club were also so happy with the end result. It has such a presence when inflated, it's hard to not come over and have a go. This will definitely be used for many events to come...."
- Maddy Shard
"The inflatable units created by Giant have proved to be incredibly valuable as a branding asset, as well as being easy to set up and incredibly functional. The units can survive the elements and the brand design is great to complement the activity in the family zones these are used in. ..."
- Chloe Jeffers - Thread
""You guys were great to deal with, and certainly made my life a lot easier knowing your team had it under control. In terms of the activation itself . The unit was a big success. There was rarely a time where we didnt have a queue of kids. And it certainly ensured NAB had a strong presence at the ground". - TLA..."
- Terence Lattanzio
"I LOVE IT. Looks fantastic, well done. Even better than I imagined, and can't wait to see it in real life. Jase ..."
- Jason Fair
"Hi David, Well I can confirm that you guys do a great job with meeting customer demands! :) thank you very much. I just wanted to thank you for fast tracking everything, and for all of your help on this project! Thanks, Lily Lily Truong Account Manager ..."
- Lily Truong
"Hi David Thought you might like this...they look amazing. Thanks for doing a great job! Kind Regards Jo Ohis Account Director - True North Australia ..."
- Joanne Ohis
""A note of thanks. The arch arrived last Friday, very quick delivery, we put it up on the weekend at our weekly running event to check it out. We are really pleased with the end result, the arch and banners is an excellent addition and will contribute significantly towards the atmosphere of our events. It looks great and the quality of the finis..."
- Wagga Lake Run and Ride
Read All

Inflatables are a versatile medium which can be used through an extensive range of applications. Whe